Robots raced and scooted on command, circuit boards sparked imagination as they transformed into buzzers and lights, and a stately building arose from identical wood planks at the Do2Learn maker space grand opening on Friday, March 11.  Faculty, staff, and students engaged in hands-on activities to create, design and learn.  Many thanks to CEHD’s own Lizzy Adams and Alison Burris who designed our Do2Learn logo that captures the essence of a maker space.

You are invited to stop by to Do2Learn. Do2Learn is open Fridays, except April 1, from 1-3 p.m. and by request, based on room availability. To schedule, send an email to do2learn-info@udel.edu. Do2Learn is housed in the Education Resource Center in Willard Hall Education Building.

Upcoming sessions are Fridays from 1-3 p.m. No reservation is needed for these sessions:

The University will retire the use of PINs for faculty, staff, and students this spring to improve the way we access our online UD accounts.  This will require that you update your security settings which you can do now.  Using longer passwords, instead of PINs, will increase your online security.

When you update your settings, you will need to create a UDelNet password that contains at least eight characters, if you don’t already have one.  You also will need to select and answer security questions that will make it easier to verify your identity if you need to reset your University password, and you need to review your contact methods (e.g. phone numbers).

More information on the security updates is available on UDaily and IT’s site.

A Place for Research!

Faculty and their graduate students can have access to OET’s human subjects server for their research.  Instead of storing files on desktops or laptops, store your research data on OET’s server.  The benefit of having your research on OET’s server is that your research is only available to individuals you authorize, the server is UD-owned and governed by UD’s security policies, and the files are backed up per CEHD’s back up policy.  Your OET account allows you access, and you also can request access for your colleagues outside of the University. To create a folder for your research, contact OET.

App of the Month: Professor 13 and Abacus Addition

The March app of the month is one near and dear to our hearts.  Professor 13 and Abacus Addition was developed by the Professional Development Center for Educators (PDCE) and OET for children ages 6-8.  Tom Fernsler, who has since retired from PDCE, developed the idea for Professor 13, his alter ego, and his faithful dog Abacus. Among the app’s activities are Trading Cubes, a game that uses a place value chart to introduce whole number addition, regrouping, and probability; Greatest Sum, a whole number addition game; Traditional Algorithm, addition of whole numbers with regrouping; and Cuisenaire Rods, manipulatives that teach basic addition facts.

The Professor 13 website offers additional support for the app including worksheets and videos featuring local students learning math concepts.   The app, developed for the iPad, became available for sale late last month on the iTunes store for $1.99. 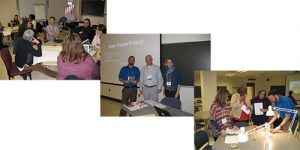 More than 130 Pre K-20 educators attended the third University of Delaware Educational Technology Conference on Saturday, March 5, 2016, in Willard Hall Education Building. The conference, sponsored by OET, the College School, and the Education Resource Center gave regional educators the opportunity to collaborate and network with other educators while they learned about the latest in educational technology.

Dean Carol Vukelich and Dr. Ralph Ferretti provided opening remarks before keynote Chris Aviles kicked off the day with 21st Century Storytelling.  Chris was one of 36 presenters that included CEHD’s own Dr. Fred Hofstetter and Dr. Josh Wilson. Many volunteers from CEHD also helped make the day a success.

Sessions on maker spaces, STEM, and gaming–reflective of current classroom trends–attracted the interest of many attendees.  One attendee commented, “Everything was wonderful.  I’m so glad I took more teachers with me this year, because they all came back enthused and eager to use more tech in classes.”

College of Education and Human Development